Speaking at a seminar on Thursday, Lê Văn Sử said shrimp breeders using the intensive models who do not meet environmental protection regulations should breed other aquatic species or switch to another shrimp model.

Local governments and the province’s interdisciplinary inspection team have been asked to carry out inspections and help households follow regulations.

More than 1,470 households breeding shrimp under these models have failed to meet regulations. The province expects to resolve any problems associated with these households by the end of the year.

Cà Mau, the country’s largest shrimp producer, has nearly 16,000 households that breed 9,620ha of shrimp under intensive and super-intensive models.

Most of the areas are in Cà Mau City and Đầm Dơi, Phú Tân, Cái Nước, Năm Căn and Trần Văn Thời districts.

Of the 9,620ha, more than 2,010ha are under super-intensive farming, in which the density of shrimp can be up to 250 per square metres, about five times higher than traditional farming methods.

Nets protect the super-intensive ponds from the sun overhead, while water wheels and pumps on the pond beds help oxygenate the water.

The super-intensive farming model requires a number of ponds that serve different purposes. First, baby shrimp are grown in one pond, then shifted to another pond until they grow slightly larger, and later transferred to a pond where they grow to maturity. Two other ponds on the farm filter fresh water and treat wastewater.

Investment is higher in super-intensive farming compared to other shrimp models.

Châu Công Bằng, deputy director of the province’s Department of Agriculture and Rural Development, said that most farmers who breed shrimp under intensive and super-intensive farming models were aware of regulations and had applied advanced farming techniques to treat waste.

However, many farmers continue to breed shrimp in unzoned areas and do not follow environmental protection regulations.

Đầm Dơi District, which has the largest area of intensive and super-intensive shrimp farming models in the province, has 4,522 households that breed more than 2,850ha of shrimp under the models. 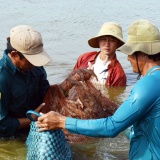 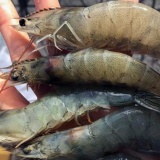 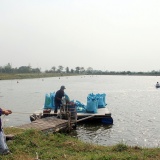