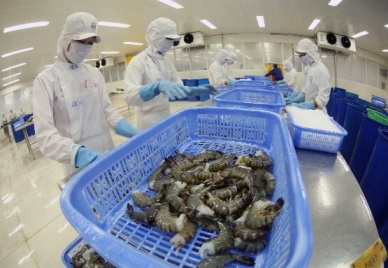 Japan is the second largest shrimp importer in the world, accounting for about 14% of total shrimp import value of the world by 2017. Each year, Japan imports about US$2.5 billion of shrimp products.

In the first eight months of this year, imports of shrimps to Japan fell due to high inventories from the beginning of the year as well fluctuations of the Yen currency exchange rate. Exports from suppliers such as China and Argentina plummeted sharply due to shrunken shrimp production in these countries.

Vietnam remained the largest shrimp supplier to Japan, accounting for 25.7% of the total shrimp imports of the country. Thailand ranked second with 18.9%, followed by Indonesia with 16% and India with 12.6%. The position of the largest shrimp suppliers to Japan has not changed since 2015. The average price of shrimp imports from Vietnam is the highest (12 US$/kg) in the top suppliers, calling for price competition of Vietnam with other suppliers in this market (Indonesia: 11 US$/kg, Thailand: 11.5 US$/kg, India: 9.5 US$/kg ...)

According to statistics of Vietnam Customs, as of September this year, Vietnam shrimp exports to Japan reached US$453.3 million, down 11.7% over the same period in 2017. Japan is the third largest shrimp exports market in Vietnam, accounting for 17.3% of the total export value.

For many years, Vietnam has maintained its No. 1 position in shrimp supply to Japan due to its advantages over other suppliers in the Japan market. The ASEAN-Japan Comprehensive Economic Partnership Agreement (AJCEP) (in effect since 1 December 2008) and Japan-Viet Nam Economic Partnership Agreement (VJEPA) (in effect since 1 October 2009) have helped create the most favorable conditions for tariffs for Vietnam seafood exports to Japan. For AJCEP, immediately after being in effect in 2009, shrimp products of Vietnam were entitled to 0% tax rate.

Processed shrimp products with high convenience are expected to grow well in the near future as Japan`s ready-to-eat food business grows, thanks to the increase in the number of single people and decrease in the proportion of housewives. In order to promote shrimp exports to Japan, enterprises should innovate their market approach and enhance brand promotion for their products.