Black soldier fly (Hermetia illucens) larvae (BSFL) are going to become one of the most potential ingredients in the aquaculture industry.

In terms of nutrition value, BSFL contains a high level of protein, having similar amino acids profile as fishmeal, and other nutrients such as vitamins and minerals (calcium).

Using black soldier fly meal is also considered a sustainable method for the development of the aquaculture industry in the future. The significant reliance on fishmeal of fish producers has put the biodiversity in the marine ecosystem in an extreme situation.

In addition, soybeans have put pressure on land in some countries such as Brazil, Argentina, China, the US, and India while several countries such as Vietnam, Bangladesh have to import this ingredient for the requirement of producing aquafeed. Currently, aquaculture producers have tried to decrease the use of fish meal and soybean by looking for new ingredients, and BSFL is a potential candidate.

Furthermore, black soldier fly can convert about 1.3 billion tons of food waste produced each year, and their waste can be used as compost for agriculture. In comparison with houseflies, black soldier fly has a shorter cycle - hatch to harvest is only 10 to 12 days, they don’t bite, sting or spread diseases. 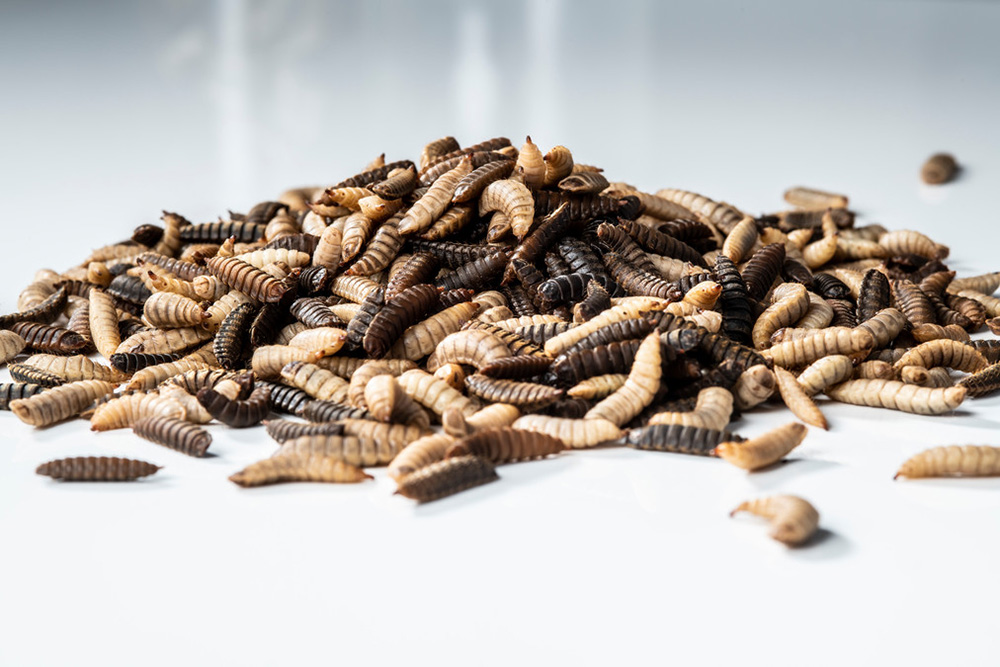 Nevertheless, the nutrition values of BSFL rely primarily on their living stages and the processing methods. To determine whether or not the processing methods significantly impact on nutrition compositions of BSFL, a study was carried out at the University Malaysia Sabah, Malaysia. There were three different types of BSFL meals were set up, including spray-dried BSFL (SPR), oven-dried BSFL 1 (OVN1), and oven-dried BSFL 2 (OVN2). The results showed that the different ways of processing came with the different proximate composition of BSFL, in which the spray-drying method got higher protein composition than the oven drying method; however, by using the oven drying method, a higher lipid level was observed. Crude protein (CP) of SPR and OVN1 methods gained similar values which were higher than OVN2.

Currently, there are two more big hurdles that BSFL is facing are scalability and regulatory approval. Although the productivity of the largest company focusing on producing BSFL is 5,000 metric tons per year, it is still not fulfilling the capacity of this producer. Now, they picture a total production per year will be hundreds of millions of tons, but investment and technology should firstly be ready to support that objective.

Over the past 5 years, they have investigated the method to produce the amount of egg as much as possible, as well as trying to understand the biology of this insect. “There have been myriad challenges, including a fire that destroyed the company’s mating chamber and a power outage during subzero temperatures that killed off much of his broodstock”, said Courtright - the company founder of EnviroFlight.

Secondly, regulatory approval is also a challenge for BSFL to overcome. In Europe and the US, using insect meal or insect-based products in agriculture and aquafeeds would have to be reviewed carefully with a long and complicated process. The concern of approver in the developed countries about bioaccumulation or other uncontrollable compositions of the insect such as black soldier fly is reasonable because if the producers harvest the insect too late, the amount of chitin, which is not easy to digest, will be high.

Moreover, BSLF do not have the omega-3 fatty acid in their body, which is normally is found in fishmeal and fish oil, but this problem could be solved by adding this fatty acid directly into the feed formulation. Therefore, the development of technology will be the key to solving the problem of BSFL, and this insect will be changed from a potential ingredient to a widely used one as the soybean meal did before.