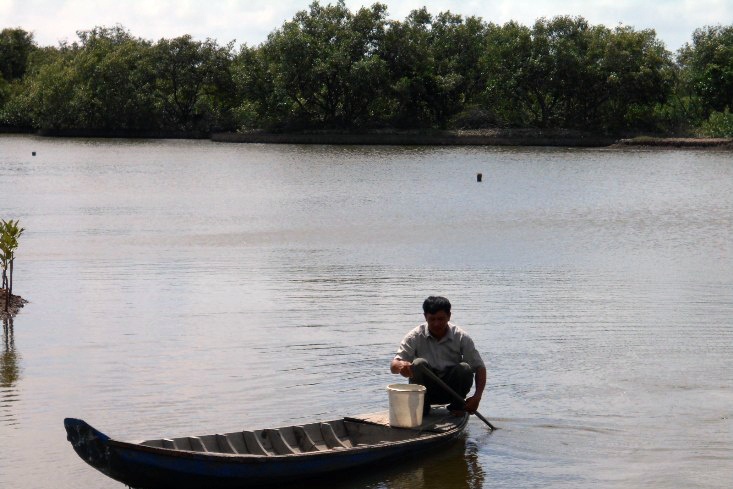 A shrimp pond belonging to a local resident in the southern province of Tra Vinh (Source: VNA)
Tweet

Farmers in coastal Tra Vinh have planted more than 4,000ha of mangrove forests to breed shrimp and other aquatic species, according to the provincial Department of Agriculture and Rural Development.

They are mostly in Duyen Hai, Cau Ngang, and Chau Thanh districts and Duyen Hai town.

The model of growing mangrove forests and breeding aquatic species in them is highly sustainable since it protects the environment amid the ravages caused by climate change, according to the department.

Besides, it involves little investment and protects the shrimp from disease outbreaks, according to local authorities.

Huynh Van Phong, who has 4ha of land in Duyen Hai town, said he grew forests on 2ha to breed aquatic species.

He has to spend money only on buying shrimp and crabs fry for breeding, and nothing on their food since they subsist on what they find in the forest, he said.

Phong also breeds blood cockles and mud clams in the submerged forest and earns dozens of millions of VND a year.

Besides, the risks of the environmental pollution and disease outbreaks are high, she said.

Duyen Hai district has more than 8,500ha of shrimp farms, according to the bureau, with the shrimp â€“ forest model accounting for nearly 60 percent.

The chain will help farmers increase their profits, sustain the shrimp â€“ forest model, protect the environment and provide the market with clean shrimp.

The Mekong Delta province has more than 9,000ha of forests, including more than 4,000ha submerged forests grown by farmers, according to the department.

Tra Vinh farmers raise brackish shrimp on a total area of 24,000ha and harvest 37,000 tonnes a year, according to the department.

Its first high-tech shrimp breeding center has been supplying quality fry to the market since March.

The center, owned by the Thong Thuan Group, has already supplied more than 250 million shrimp fry, mostly white-legged shrimp, to farmers in Tra Vinh and other delta provinces.

Tran Trung Hien, director of the department, said the center has a capacity of more than 5.5 billion white-legged shrimp, black-tiger shrimp and blue-legged prawn fry a year.

It would help ensure supply of quality shrimp fry for farming, he said.

It has 72 other breeding establishments that can supply around 1 billion black-tiger shrimp fry annually.