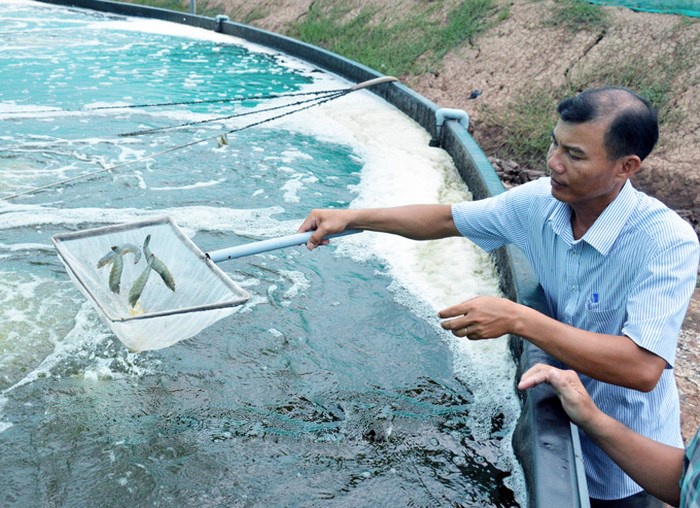 Speaking at a seminar held in Bac Lieu province on June 3 on measures to develop the shrimp sector sustainably, he urged provinces and cities to set up sustainable shrimp farming areas and ensure cooperation between farmers and processors and others in the production chain.

Farmers raise brackish shrimp on 637,000ha, slightly up from last year, including 582,000ha of black tiger shrimp and 54,500ha of white-legged shrimp, according to the Directorate of Fisheries.

In the first five months of this year a total of 200,000 tonnes of shrimp were harvested, an increase of 11.1 percent year-on-year.

White-legged shrimp accounted for the increase in both area and output, the directorate said.

Their exports came up against technical barriers put up by importing countries and there were not enough market forecasts, he said.

The price of white-legged shrimp has fallen by 10,000 VND ‚Äì 30,000 VND a kilogram since April, according to the directorate.

Higher output in major shrimp producing countries and lower imports by major importers have been a double whammy, according to the Vietnam Association of Seafood Exporters and Producers (VASEP).

Truong Dinh Hoe, VASEP General Secretary, said the price of raw shrimp, especially the white-legged variety, was not likely to increase by much this year.

Le Van Su, Deputy Chairman of the Ca Mau provincial People‚Äôs Committee, said the price of black tiger shrimp was steady and 40 percent higher than that of white-legged shrimp.

The price of black tiger shrimp remains high since 2011.

Participants at the seminar agreed that farming of white-legged shrimp should be reduced in terms of both area and output this year and that farmers needed to adopt techniques that helped reduce costs.

They should focus on black tiger shrimp and control shrimp diseases, they said.

Cuong called on the directorate and other relevant agencies to efficiently forecast market conditions and warn farmers if their output seems likely to exceed demand.

The market would revive and so farmers should not panic and sell immature shrimp, he said.

He instructed agencies under his ministry to work with provinces and cities to help farmers adopt advanced techniques.

The ministry would work with other relevant ministries and sectors to resolve problems related to processing, infrastructure and prices to ensure the sustainable development of the shrimp sector, he promised.

Dead in the water

Meanwhile, in Long An province, farmers are suffering huge losses.

In Nhan‚Äôs farm, ponds once filled with shrimps and aeration propellers are now deserted.

‚ÄúDiseases wiped out most of my shrimp after solely a month farming. When I collected the leftovers, the prices were too low to make my investment back, let alone profit,‚Äù Nhan said.

Their counterparts in Tan Chanh hamlet, the biggest feeding resource area for shrimps, were also said to be mulling suspending the farming of more than 100ha out of 850ha of shrimp ponds, according to Nguyen Trong Tuyen, Vice President of Tan Chanh hamlet.

Pham Phu Hung, Deputy Executive of Agriculture Extension Centre in Long An, attributed the cause to the low financial value of crops compared with high-priced inputs, which resulted in massive losses for farmers.

‚ÄúIf the prices for crops went up, farmers would continue growing shrimps at the drop of a hat,‚Äù he noted.

Dong Quang Don, Manager of Agriculture and Rural Development in Can Giuoc district agreed, suggesting farmers continue their work at a steadily low pace to sustain the ponds and minimize market price risks. In the long-term, Don said cutting edge technology should be applied in shrimp farms.

A spread of infections for shrimps was another reason for crop failure, Pham Phu Hung added, so farmers should only count on credited shrimp breed sellers for input and renovate their ponds carefully.

Vietnam‚Äôs shrimp exports to the US are in intense competition with India, according to cafef.vn, while traders were reported to only buy small prawns while refusing to take large shrimps.

Farmers all over Mekong Delta are facing the same issue, suspending their operation after their investment turned no profit, hoping for a rise in prices.