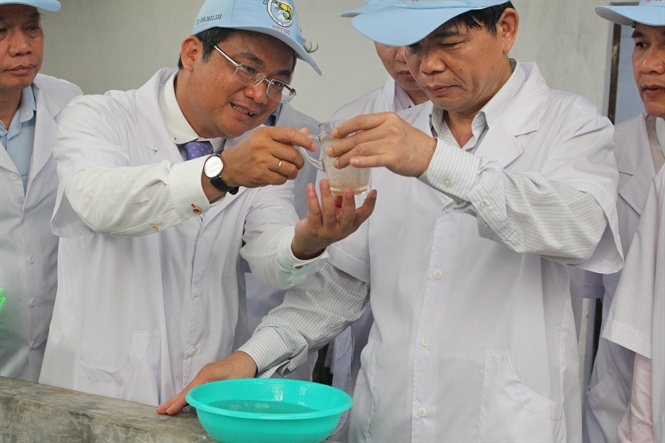 A breeding shrimp farm of the Viet-Uc Seafood Corporation in the Mekong Delta province of Bac Lieu has become the first in Vietnam to fulfill criterion set by the World Organisation for Animal Health (OIE).

Since 2015, the provincial Departments of Animal Health and of Agriculture and Rural Development have assisted the company to build its safe shrimp production chain.

At a ceremony announcing Vietnamâ€™s first OIE-standard shrimp farm held in Bac Lieu city on November 25, Chairman of the National Assemblyâ€™s Committee for Science, Technology and Environment Phan Xuan Dung said the accreditation will create a big opportunity for Vietnamese shrimps to enter demanding markets in the world, helping to realize the goal of US$10 billion in export turnover in 2025.

Phung Duc Tien, Deputy Minister of Agriculture and Rural Development, highlighted the event as a turning point and success of the company and the shrimp sector as well.

It will open a sustainable development path for Vietnamâ€™s shrimp production and export in the future, he added.

Dang Quoc Tuan, Vice President and Chief Operations Officer of the Viet-Uc Seafood Corporation, said his enterprise is investing in technology and human resources in search of measures to boost the shrimp industryâ€™s value and sustainable development.

According to him, an increasing number of countries in the world are requiring shrimp products to have a disease-free certification. As such, the building of safe shrimp production chains is important and necessary.

Among the biggest shrimp producers in Vietnam, the Viet-Uc Seafood Corporation is operating shrimp farms from Nghe An to Ca Mau.

The Vietnam Association of Seafood Exporters and Producers (VASEP) said shrimp exports contributed the most to the total national aquatic export value, with a growth rate of 21% to US$3.8 billion in export value for 2017.